Affiliate Disclosure : As an Amazon Associate I earn from qualifying purchases.  Some of the links in this post are affiliate links and if you go through them to make a purchase I may earn a commission.

… and a “chilli” is one of our favourite Mexican meals !

The reason we want to talk about the Cayenne is because we often don’t know if the chili we se to buy is hot or not ! Here in Spain, it’s not labelled according to its heat. We know the Cayenne is one of the hottest, so if we want the heat for taste or better health benefits – that’s the one we go for !

Here we go again ! It’s also spelt Capsaican in the U.S. The Spanish for Capsicum is Pimiento ! That’s what we see on all the spice jars here in Spain, and we always assumed that meant peppers ( think it does too 😉 . 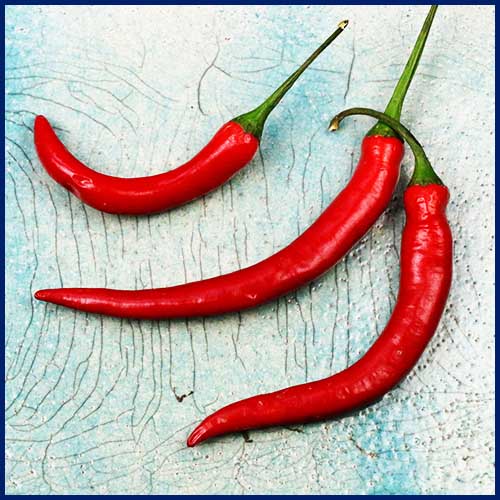 Wikipedia says “Capsicum annuum is a species of the plant genus Capsicum (peppers) native to southern North America and northern South America. … The species encompasses a wide variety of shapes and sizes of peppers, both mild and hot, such as bell peppers, jalapeños, New Mexico chile, and cayenne peppers.” It’s called Capsicum Anuum… because it’s an annual, i.e. yearly plant.

It’s so easy to use

We just sprinkle it… but be very careful – it’s HOT ! Try just one, two or three shakes and taste test it. 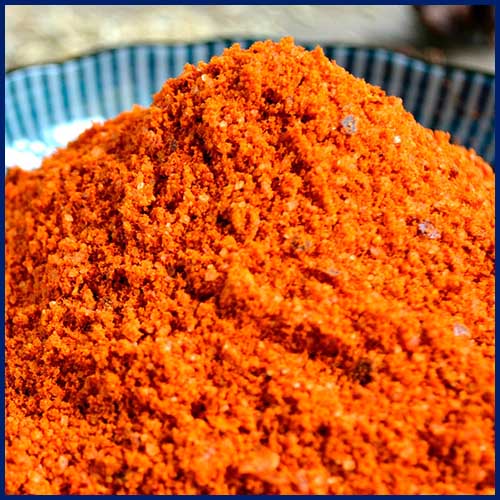 After drying and grinding, we find it lasts forever !

We use the chili flakes in cooking, you can make your own flakes easily  from whole dried ones – just pop in the chopper attachment of a hand blender and blitz for a matter of seconds. Paul also likes to chop up a fresh one. its’ hot  to touch so be VERY careful. We use gloves when chopping if we can, otherwise wash your hands straight away and don’t let your fingers stray as they may have hot chili on them. The heat comes from the seeds and the membrane of the chili pod.

So, Use the seeds if you want a stronger flavour. Sometimes you get the dried version with seeds included, sometimes they are filtered out.

We also us the powdered version a lot. It’s so easy to sprinkle on eggs, or anything ! Sometimes instead of the seeds, or, also at the end of cooking. It’s easy to add a shake or two of powder at the end, if you feel you have’t added enough during cooking !  I , Aoibheann, also use the Cayenne powder in drinks, for spicy popcorn making, or when cooking small quantities so that the heat spreads around more easily.  It’s not easy to dissolve though so a blender helps if you aren’t mixing it with a fat.

Did you know also that the chili pepper such as cayenne has also been used for hundreds, possibly thousands of years as a medicine, and not just a herb or spice for cooking. It seems, just like the cocoa we are drawn to all these South American ingredients ! Apparently they were brought over to Europe by Christopher Columbus about 5 centuries ago.

It’s the Capsaican ( Capsicum ) in the pepper that gives most of the heat, and also, coincidentally that gives the medicinal benefits. So the more capsaican there is, the better it is for you, and the hotter the chilli is. It’s a fire that doesn’t let up and apparently it can literally incinerate a disease !

So what are the medicinal or healthy contents of Cayenne ?

My favourite herb and spice book called “Healing Spices” is my go to for all this kind of information. It tells you a lot about each ingredient and how it heals your body, as well as how to buy it and cook with it, and some cool recipes. I just eat it all up !

My book talks a lot about the Chile and the Capsaican in general rather than the Cayenne variety alone.

Here’s what I learned from the book:

Capsaican has been studied hugely and apparently the studies show it ‘s a :

good for the stomach... for ulcers, indigestion

WOW ! How does it do this ? My wee bible tells me that capsaican contains a wealth of antioxident vitamins,  and ounce for ounce a chile contains 9 times more Vitamin A  than a green pepper, and twice as much Vitamin C as an orange. It’s also rich in potassium and magnesium.

Here’s some more relevant information from healthline.com, about the Cayenne pepper. They say…

one tablespoon (5 grams) of the cayenne pepper contains

Manganese: 5% of the RDI

Potassium: 3% of the RDI

Riboflavin: 3% of the RDI

A sprinkle of goodness a day

Like so many natural ingredients it seems that they have been used as food medicine for centuries and so there are many modern lab tests run to see what the benefits actually are. It also feels like everything can possibly cure all our ailments from cancer to heart disease, lack of nutrients etc. However, no-one can ever seem to say for 100% sure it will cure something. So take it like a pinch of salt so to speak. A pinch of pepper can’t harm, can it ? At the same time it might help !

We’ve heard it can also help blood circulation, reduce appetite, increase a heart rate, reduce blood pressure, stop an external bleed – apparently – but we haven’t tried it for any of these. Also we believe it may only have a small effect, and your body may get resistant to it. So it’s not a miracle worker, but we think every little helps, and we like to use natural things in strict moderation of course.

and… always seek medical advice, and don’t just do what we do !  Take it at your own risk and all that.

Paul and I love to use chili in cooking… the easiest way to do it is with either a pinch of cayenne powder, or a sprinkle of dried chili flakes. Paul does like to grow chilis when he can and chop his own.. but even with gloves on you have to be ultra aware and not transfer the heat of the chili to your eyes etc. !

I (Aoibheann) take it in my morning tea or coffee sometimes to give it a kick – just a few sprinkles but apparently you can take up to a tea-spoon – ouch ! Maybe that’s why there are tinctures and tablets on offer instead. Apparently it boosts the metabolism because it increases the amount of heat your body produces. So having extra heat inside that makes you burn more calories.

I did find that just a pinch gives my metabolism a kick start for the day too. I don’t like to overdo things so don’t religiously have it every day of the year! ‘Everything in moderation’ is the way i was brought up , along with ‘everything for a reason’

So where else can you get the goodness,  in your drinks or food.

A little ‘simple living’ snack we have almost every day. It keeps us going late morning or early evening, and is a pretty good alternative to crisps !

We adapted this at maison mk (the boutique hotel we used to own ) by using home made moroccan harissa to spice up the popcorn. it was a real hit served with the rooftop sundowner cocktails at gastro mk.

There are lots of claims that this is good for de-toxing the body. Just like lemon juice, it’s good to have it first thing in the morning. You don’t need more than a pinch (1/8 teaspoon ) as 1/4 teaspoon cayenne is more than enough for the day and I like to have a pinch on some food too ! Remember, everything in moderation otherwise that chili will bite you back !

We’ll make the recipes below clickable soon ( when red and underlined), to take you to our favourite little recipe finds as we post them.  Watch this space…

We want to help you find the right tools to cook better. But we’re all suffering from information and salesmen overload online!  So… we want to simplify and clarify it,  so you can make faster and better choices.