Another version of golden milk… 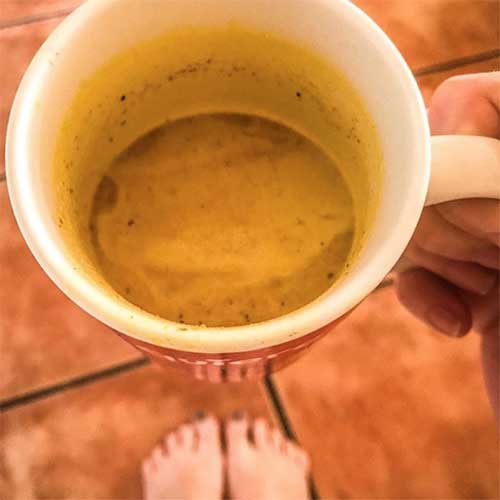 It’s a quiet morning and everyone is asleep so I don’t want to start grinding my cinnamon etc for porridge ( another story !) and wake them up in our simple, small, Canarian bungalow.

Is there such a thing as too much turmeric?

Haven’t had this in a while,  cos my all natural  ‘knee tablets’ ( another story ) that I’ve been perscribed has curcumin in them already. But I fancy a cuppa this morning.

And I feel a little sickie ( another story !) So I head out to my ‘jar shelf’… with a cup and a dessert spoon and reach for the ginger for my tum tum, and take a half spoon. Then the turmeric, and put a whole heaped spoonful in the cup. Then the finely ground pepper (of course, to go with the turmeric to bring the best out of it) and put a meek quarter spoon in. And now for some flavour… cos I’m not a turmeric only flavour fan ! I’d usually put ground nutmeg and cinnamon in but I only have the sticks and I can’t make a grinding noise. So instead I take a quarter spoon of mixed spice ( a pumkin spice kind of mix  – with nutmeg, cinnamon, cloves etc). Done. Nearly…

Now for some nut milk and something sweet perhaps to add the spice to, and some coconut oil to get it all going…  geeee the jar is empty ! …. but I need to heat the turmeric to bring out the goodness.  To get the heat going and I don’t fancy olive oil ! So I think, what would i not mind tasting… and I go for a smattering of sesame oil in the heated pan.

Just a smidge of oil in the pan that’s been on full heat for a few minutes. Then popped the spice mix in to heat. Quick stir and take it off the heat. Add coconut milk and a squeeze of  agave syrup.
Heat it up.
Pop it in a cup.
Feet up and enjoy.

We love great food & cooking… & simplifying life.
We want to help you find the right tools to cook better.

But we’re all suffering from information and salesmen overload online !  So… we want to simplify and clarify it,  so you can make faster and better choices.